Eugenics, Race, And A Woman's Right To Chose 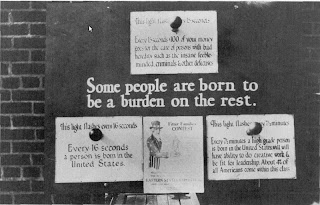 "...the Negro lacks in his germ plasm excellence of some qualities which the white race possess, and which are essential for success in competition with the civilizations of the white races at the present day."
- California, 1926

Eugenics (termed by Francis Galton), or the means to "improve" the human race through infanticide, forced sterilization or genetic manipulation of those individuals deemed inferior (mental illness, low IQ, the poor, criminals, etc.) is rooted in the ancient philosophic works of Plato and Aristotle and has continued up to the present day.  The modern eugenics movement began in the late 19th century in the United States with the belief that criminality, imbecility and mental illness were hereditary and therefore should be controlled through forced sterilization or forced removal of "feeble-minded" children.   Some of the biggest proponents of the era weren't fringe characters or Nazi idealists but were arguably some of the most influential people of their time.  These included President Theodore Roosevelt, Planned Parenthood founder Margaret Sanger, Winston Churchill, and Economist John Maynard Keynes.  While the early years of the eugenics movement focused on poor white Americans, by the 1930's most of the forced sterilizations were on poor women of color.  Rooted in the belief that African Americans, Mexican Americans and Native Americans were genetically inferior to European Americans, social scientists of the day saw this reflected in data showing lower performance in education and in criminality.
The Supreme Court showed the practice to be constitutionally viable in 1927 (Buck v. Bell) in regard to  the prevention of children born to people with disabilities.  The movement saw its greatest momentum between 1907 and 1968 when between 65,000 and 100,000 people were sterilized.  Clinics were placed in poor neighborhoods and eugenics propaganda was spread throughout America through county fairs where "fit family" contests were frequent.  This was not without notice to the rest of the world.  Nazi Germany used the eugenic framework from the US and other countries to justify the forced sterilizations of people with mental illness and developmental disabilities and the mass slaughter of Jews, Poles, Roma, Gays and others to root out less desirable races from their midst.
The American social work profession, always being in transition, was unfortunately a major player in eugenics practices as they often were the gatekeepers of who received the procedure and who did not.  This also remained true in other countries where eugenic practices were the accepted "humanitarian" philosophy.
In the wake of the Civil Rights Movement and the Feminist Movement of the 1960's, eugenic practices began to become highly unpopular as biologic science and social science began to show that race was not biologically determined but socially constructed.  Deficiencies in the classroom and overrepresentation in the prison system were shown to be the result of racist institutions and not on the genetic makeup of the individual.  Around this time social work also began to discredit eugenic philosophy as deeply flawed and shifted to a self-determination framework.  This fell in line with the belief that women have the right to informed reproductive health decisions and that the individual, not the state, has the right to choose regardless of race, gender or socio-economic status.
Today eugenic practices seem to be nothing but a ghostly whisper from the past.  Indeed it has been relegated as junk science by most if not all mainstream professional organizations.  However, in much of the world, especially the Global South, women continue to lack access to reproductive freedom and up to date reproductive health information.  As a result of gender discrimination and poverty, women in the developing world are still at high risk of unwanted pregnancies, low education and literacy rates, HIV/AIDS, fistula, and maternal mortality.  In many parts of Asia, a war on girls is being waged in gender sex selection with a cultural preference to have boys.  This has lead to a major gender gap with a disproportionate number of boys over girls.  In China, with the one child policy, families without means are committing infanticide, aborting, or putting up for adoption girls in favor of their only child being a boy.
Another modern concern arose with the advent of the Human Genome Project, an international collaboration to sequence the entire human genome.  This is believed to eventually lead to cures of genetic disorders, cancer, diabetes, mental illness, etc. and has been hailed as one of the greatest feats of modern science.   Indeed, one's perceived genetic make-up has lead to terrible atrocities in the past and with a future of designer babies, human-animal chimeras, and other eventualities, precautions must be made to prevent eugenic type philosophies from taking root again.
One such precaution is for social workers to have a basic understanding of genetics if not have fluency in the field.  The National Association of Social Workers has developed practice standards for integrating genetic science into ones framework.  The inclusion of genetics into the education of social workers allows them to have the necessary tools to advocate with clients on all levels and to provide relevant information so clients may make informed decisions about their lives.